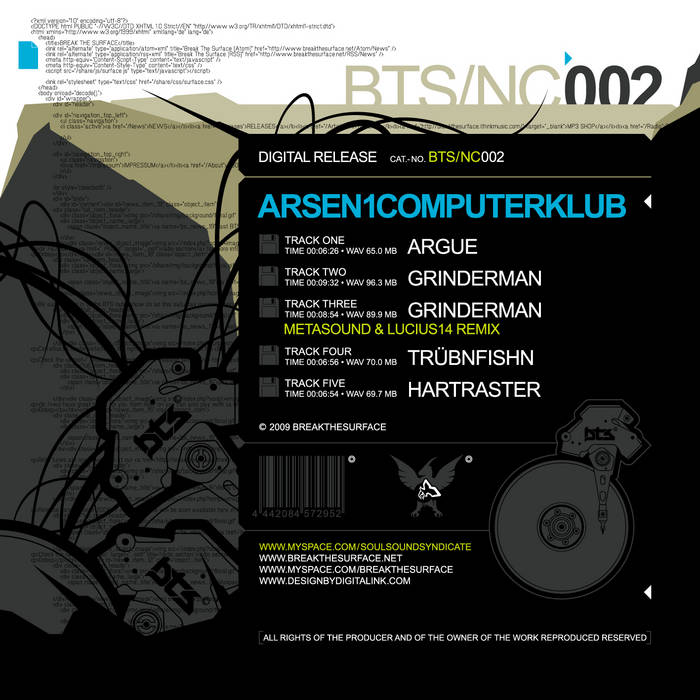 Arsen1Computerklub - a name that sounds complicated, but actually it is not. Since 2000 it stands for the unstoppable urge to celebrate electronic music. Who gets to hear Arsen1Computerklub will immerse in a wide range of sounds: from Minimal Techno, Trip-Hop and Nu Jazz to IDM or Glitch there is not a genre omitted. With his first release on BREAK THE SURFACE called "Trübnfishn EP" he presents his very own interpretation of Minimal / Techno.

Track 01: Argue // written and produced by Arsen1Computerklub
Imagine a bunch of street musicians jamming in front of a Techno club. A female singer's gentle voice joins in and from inside you hear a nice 4/4 groove. All the while you are standing right in the middle where both mixes perfectly toghether and you realize how beautiful it can sound when modern electronic club music is combined with organic elements and handmade instruments.


Track 02: Grinderman // written and produced by Arsen1Computerklub
The not less exceptional second track is called "Grinderman". The buzzword here is Tech/Blues. Arsen uses blues guitar and vocal samples as leading elements to compose a piece of music unique to himself. The track is grooving straight forward without too much fuzz and again the fusion of handplayed and electronic music turns out very well.


Track 03: Grinderman Remix // remixed by Metasound & Lucius14
The Metasound & Lucius14 Remix appears like the more straightforward, club-oriented brother of the original "Grinderman". Without losing the inspiring and uplifting ease, the remix is developing its driving and percussive groove right from the beginning. This is definitely the right choice in prime time!

Track 04: Truebnfishn // written and produced by Arsen1Computerklub
As we are moving to the title track of the latest BREAK THE SURFACE release, prepare to be taken even deeper into Arsen's inexhaustible sound realms. Taking a driving rhythm as main ingredient, flavoured with a bit of modern Dubstep sounds here and hypnotic vocal samples there, Arsen tastily arranges what the ecstatic celebrating dancefloor needs.

Track 05: Hartraster // written and produced by Arsen1Computerklub
Last but not least Arsen delivers a rather broken but nevertheless forward moving track. The mood changes between slight melancholy, cool liveliness and a healthy measure of weirdness. A tune with unusual structures that is simply refreshing.