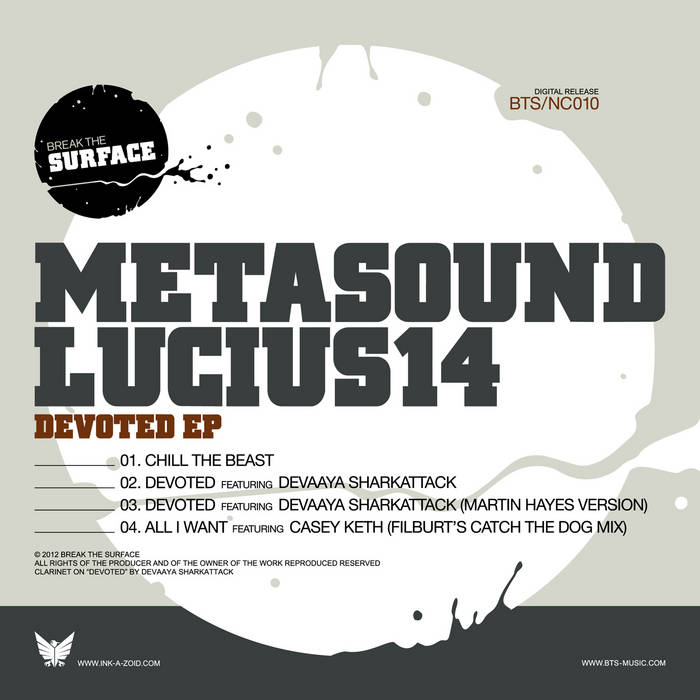 The Devoted EP, released in May 2012, marks a milestone for the BREAK THE SURFACE label. The 10th release in the New Chapter series includes two new tracks by Metasound + Lucius14 as well as two remixes by Filburt and Martin Hayes.

"Chill the Beast" is the EP's opener, chilled down to 106 BPM and flavoured with organic funk grooves. Similar to earlier tracks, guitar samples add even more drive to these vivid sounds.

The title track, "Devoted", heads to a slightly different direction. Screwy beats and a deep atmosphere are the groundwork the track is built upon. The vocals of Lucius14 and the clarinet play of Devaaya Sharkattack (part of Praezisa Rapid 3000) contribute to the track's soulful, detached atmosphere.

Martin Hayes' take on "Devoted" comes along with a severe NuDisco-Funk flavour and some crisp beats. Unlike the original laid-back feeling, Martin's version has a rather straight forward feel to it.

Another highlight is Filburt's remix of "All I Want", which was originally released on Metasound+Lucius14's "Campfire Funk Pt. 1" EP. Filburt builds upon the original's tight beats and soon drifts away with beautiful deep harmonies.